Realme Narzo 20A: The Good, The Bad, And The X Factor 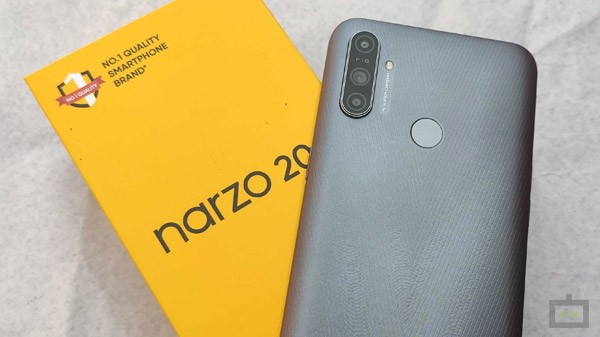 Realme Narzo 20 series has been officially announced in India. The company has launched three different models for the budget segment. The Realme Narzo 20A comes as the affordable model in the lot and packs a tall display, triple rear cameras, and a new skin at the back panel.   The device is somewhat identical to the standard Realme Narzo 20; except for the rear camera design. The Realme Narzo 20A is priced at Rs. 8,499 for the base model with 3GB+32GB configuration and Rs. 9,499 for the 4GB RAM+64GB storage option. The smartphone comes as the company’s answer of the Redmi 9 series which is currently the most well-equipped series in the sub Rs. 10,000 segment. In our last article, we did the first impressions of the standard model. This article focuses on the initial impressions of the Realme Narzo 20A. Let’s have a look.

The Realme Narzo 20A derives its power from the 2GHz Qualcomm Snapdragon 665 which has eight cores. The chipset is accompanied by Adreno 610 GPU, 3GB/4GB RAM, and 32GB/64GB storage option. This mid-range chipset powers some other popular budget smartphones such as the Redmi Note 8, Realme 5s, and the Vivo U10. The device ran apps without any lags during our testing. Even with up to four apps running in the background, the device’s functionality is swift. Gaming also is decent, but we are yet to test its full potential. Software-wise, the Realme Narzo 20A has the same Android 10 OS with a Realme UI skin layout on top. The UI is identical on all the three variants. The handset comes with all the Android 10 elements including Dark Mode, gesture-based navigation, and Digital Wellbeing.